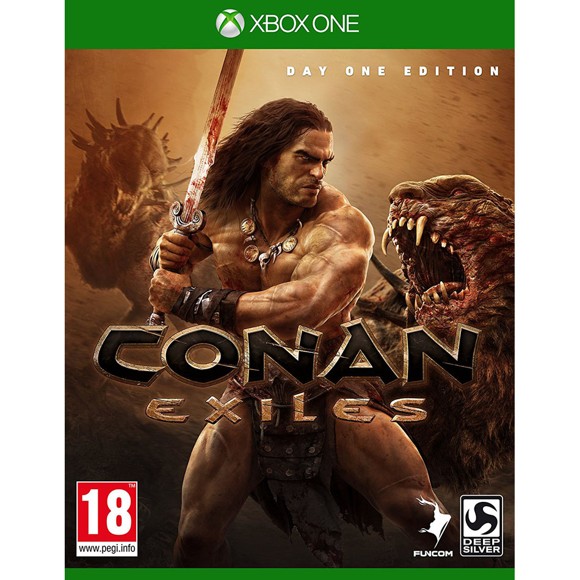 op Funcom
Onderdeel van deze campagnes:
Editie
Regio
Platform
This game is a work in progress. It may or may not change over time or release as a final product. Purchase only if you are comfortable with the current state of the unfinished game. Conan Exiles is an open-world survival game set in the brutal lands of …
Lees meer

This game is a work in progress. It may or may not change over time or release as a final product. Purchase only if you are comfortable with the current state of the unfinished game.

Conan Exiles is an open-world survival game set in the brutal lands of Conan the Barbarian. Survive in a savage world, build your kingdom, and dominate your enemies in brutal combat and epic warfare.

Start with nothing but your bare hands and forge the legacy of your clan, building anything a small home to gigantic fortresses and entire cities. Wage war using swords, bows, siege weapons, and even take control of giant avatars of the gods and lay waste to enemy cities.

Explore a vast, seamless world full of challenge and opportunity. Hunt animals for resources, slay monsters for treasure, and delve deep underground to discover the secrets of ancient civilizations.
Conan Exiles can be experienced in both local single-player and in persistent online multiplayer.

PRE-ORDER REWARD: Conan’s Royal Armor
Pre-order and get this exclusive in-game item at launch! Long after his adventures through the Exiled Lands, Conan became King of Aquilonia and this was the armor he wore when defending his kingdom. With Conan’s Royal Armor you can dress like a true warrior king!

• EXPLORE A VAST WORLD: Explore a giant world, from the burning desert in the south to the snow-capped mountains in the north. Discover ancient cultures, ruins, and dungeons.

• SURVIVE: Stay warm, cool yourself down, drink and eat, weather scouring sandstorms, prevent your mind from being corrupted when exploring dark dungeons, and battle vicious monsters to stay alive.

• BUILD: Harvest resources to craft tools and weapons, then build anything from a small home to entire cities piece by piece. Build walls, traps, elevators, and more, then deck out your creations with a wide variety of different furniture, crafting stations, and NPC guards.

• DOMINATE: Wage war against your enemies, use siege weapons and explosives and see their walls crumble to dust, then unleash your savage fury in violent and brutal combat.

• BUILD AN ARMY OF THRALLS: Capture NPCs, drag them back to your base, and use the Wheel of Pain to break their will. Turn them into archers, crafters, entertainers, and more for your settlements.

• BECOME A GOD: Sacrifice your enemies on the altar of your god then summon and take control of their huge, towering avatar. Crush enemies and entire buildings under your avatar’s feet.

• PLAY TOGETHER OR ALONE: Play alone locally or fight for survival and dominance in persistent multiplayer on public servers. You can also host your own server and invite others to join you.